What Does a ‘No Refusal’ Weekend Mean for You? 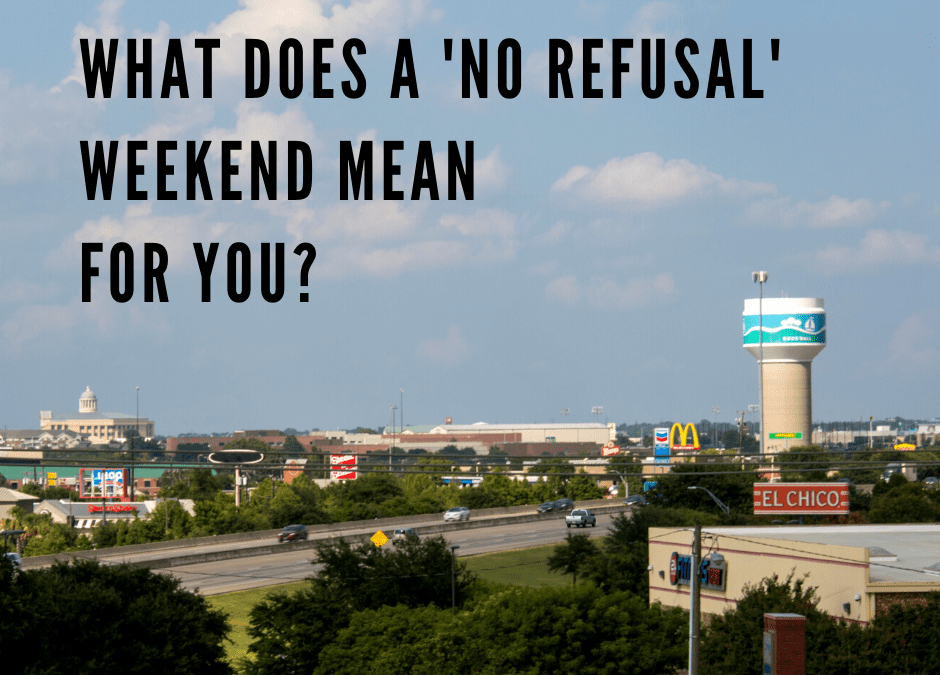 ‘No Refusal’ Weekends in Texas

You should always be careful when deciding to get behind the wheel after consuming any amount of alcohol, drug, or prescription drug not only because it is dangerous to you and others, but also because you could be arrested after consuming ANY amount of alcohol, drugs or prescription drugs if the police officer believes you have lost the normal use of your mental or physical faculties.

It is often a misconception that you must be over the .08 blood alcohol concentration (BAC) limit in order to be arrested or charged with a DWI. This is not true. The .08 BAC limit is only one of three different ways the State can prove intoxication. The State can prove intoxication by introduction into your system of alcohol, a drug, a dangerous drug or any combination thereof by:

So what does that mean with regards to a “No Refusal Weekend?”

Why do we care if they have someone “on call” to sign warrants?

Situation #1: On a normal weekend where there is no judge “on call,” if someone is pulled over under suspicion of Driving While Intoxicated and asked to give a blood test and they refuse to do so, the police department will suspend that person’s driver’s license for a period of not less than 180 days, but will not be able to obtain the evidence of the driver’s BAC. The officer will be left with relying on the first two ways to prove intoxication, that the driver lost the normal use of his/ her mental or physical faculties, and will not have evidence to prove the driver’s blood alcohol concentration. It should be noted the officer does have the option to request that you submit to a breath test, as well.

Situation #2: On a “No Refusal Weekend,” if the officer pulls someone over under suspicion of Driving While Intoxicated, and asks the driver to submit to a blood test, and the driver refuses to do so, that person’s driver’s license will be suspended for a period of not less than 180 days, and the police officer will be able to get a warrant signed by a judge or qualified magistrate that is “on call” allowing the officer to obtain that driver’s BAC result through a blood test.

Note: Contrary to popular belief, the blood test does not occur on the side of the road. Normal procedure is for the officer to take the driver back to the police station while he/ she prepares the warrant and obtains the judge’s signature. Then the officer, with a signed warrant in hand, will take the driver to a nearby hospital where a nurse or qualified technician will then draw the driver’s blood and preserve it for testing in the Department of Public Safety crime lab. It will take several months before the officer, the prosecutors, the defendant and his/ her attorney will know the exact BAC result.